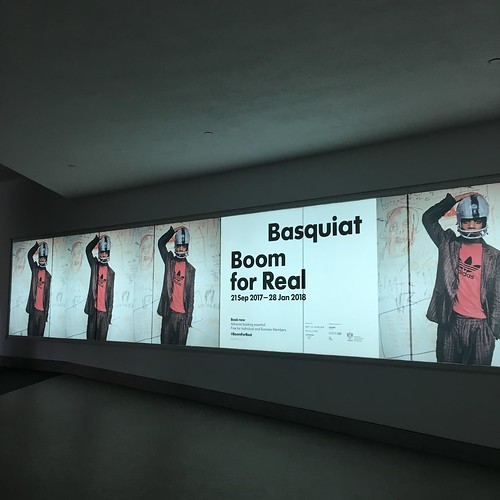 One of my goals this year is to try and go to one cultural event each week, whether it be the cinema, theatre, talk or exhibition.  I’m so lucky to be near London so its easy for me to get into town and visit different locations.

Before Christmas, I noticed that the Basquiat exhibition at the Barbican was due to close in a few weeks so I made sure to snap up a ticket for the last week of the exhibition in January.

I must admit I didn’t know a lot about Basquiat so I was hoping to learn something new, I was tempted to do the whole google and wiki learning before the exhibition but I held off as I always felt that a really comprehensive exhibition should be able to tell you about an artist as well as their work on show.  I’m glad I did as I learnt a lot!

Before going, my main take away from Basquiat was that he was a young, black street artist in New York who became the toast of the town with some connection to Andy Warhol and David Bowie. I also knew that Matt Dillon has some of his artwork in his own personal art collection and that he seems to be an influence on Matt’s own artwork so I was intrigued to see Basquiat’s art up close.

The Barbican is such an unusual venue, housed in a Brutal estate in the City of London, its stark concrete houses a hot house of greenery inside as well as exhibition space, gallery and a theatre. 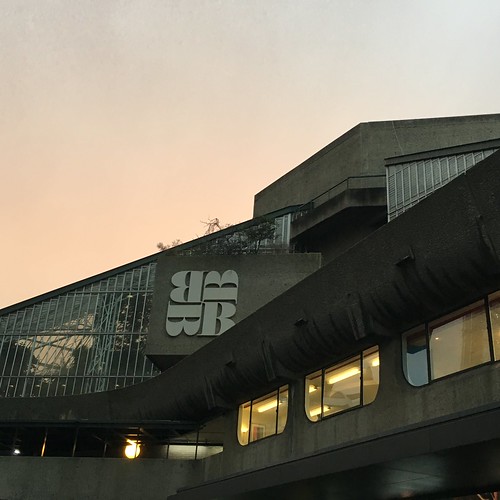 What’s great about the Barbican exhibition space is that the floor has all these little rooms off a walkway mezzanine so they were able to do themed rooms for different areas of his life, displaying artworks, printed materials like magazine articles (one profile of Basquiat was written by David Bowie himself!), postcards on tables within the rooms, leading back down to his larger artworks and his own reference items on the main floor. Exhibition guides advised us on where to start as we headed up the stairs armed with a map in our mini exhibition guide which detailed which artworks were in each rooms, along with Basquiat’s story. 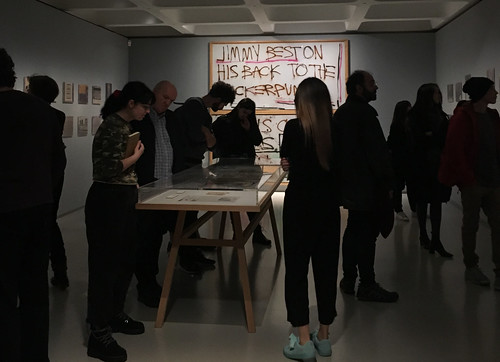 My first impressions were energetic colour that draws you in and that Basquiat himself was cute. Shallow I know, but he seemed to have this energy that radiated off him in photos. 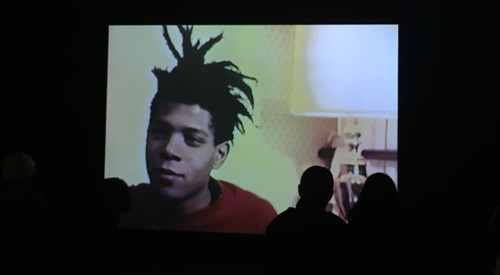 You first head to a room where you learn about how Jean-Michel Basquiat started as a street artist with a friend under the name, SAMO – Same old shit, and they quickly caught the attention of the NYC art press with their brilliantly poetic, witty and barbed tags across NYC. For instance, photographed on a wall outside famous NYC punk store, Trash and Vaudeville, they wrote”SAMO as an end to vinyl punkery” which made me laugh!  I love the distinctive way they wrote the E’s. Love that someone took the time and effort to photograph all the SAMO art they could find around the city, as who would even remember them if they hadn’t photographed them at the time? Really brings home how ephemeral and fleeting the nature of street art can be. 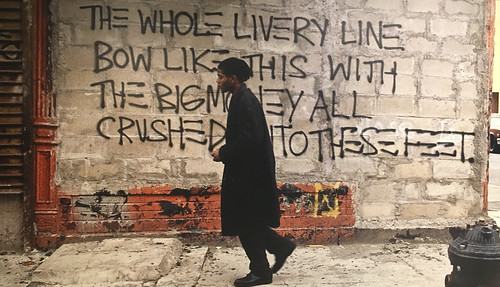 This developed into selling photocopied collaged and painted postcards, often being chased away from selling outside the Guggenheim museum even though he was able to sell one postcard to Warhol which he was ecstatic about.

As the art world took notice, he very quickly was able to put an exhibition together and they replicated that very first exhibition in one room, with his famous UNTITLED portrait series. 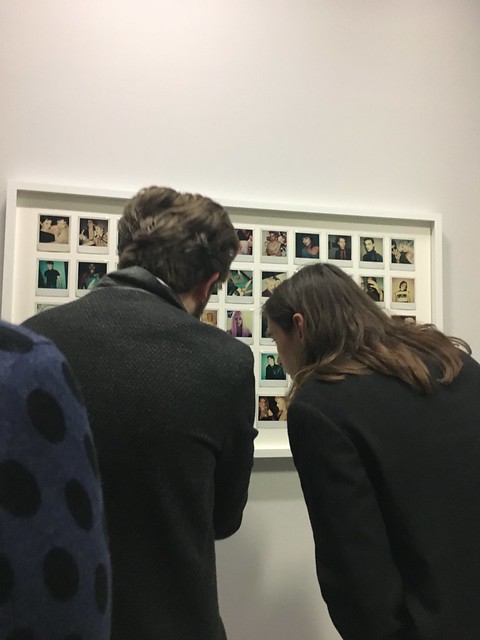 Other rooms focused on the art life in NYC fused with the emerging club life, with a wall of Polaroids from nights out as well as collaborations with friends. Jean-Michel would DJ at club nights and mingle almongst the up and coming people including Debbie Harry and Grace Jones. Andy Warhol and Jean-Michel became close friends, and collaborated on a few artworks, went on trips to support other artist friends in Europe and supported each others work. I assumed he was gay but he seemed to have various girlfriends who he went on trips with. 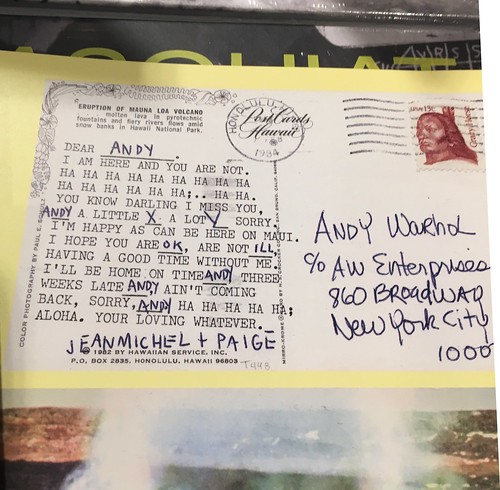 Sharing a studio with friends led to artwork everywhere, all over the floor, that people would step over,  including a whole fridge that was just tagged all over, even with some Flintstones and Jetsons drawings! 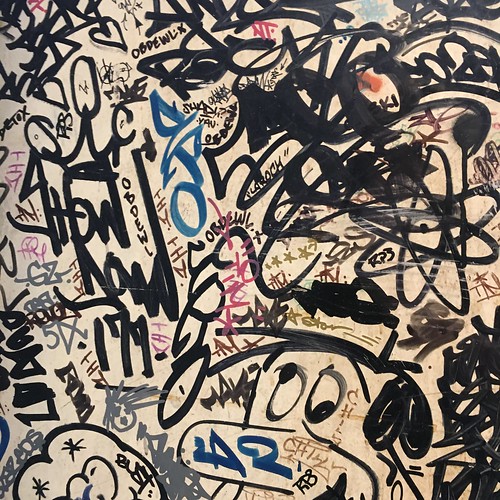 What I found compelling about Basquiat apart from his sense of humour that came through his art,  was that he couldn’t work in silence, he’d have a radio or music on his boombox or have his television on in the background.

“I’m usually in front of the television. I have to have some source material around me to work off.”

.Surprisingly for a very early 80s guy, he’d already accumulated over 1000 video tapes (including David Lynch’s work!) and a tape player at a time when these were not cheap at all! He seemingly loved to consume everything that caught his interest and put it all together on canvas in his own way. He notably saw Apocalypse Now ten times in one week at the cinema! Sounds like my kinda guy..In all seriousness, I love how he took in everything he enjoyed and put it all together to make artworks based on his self identity, including his famous self portraits .

On the lower level of the exhibition, they showed his own reference library of books with topics like symbols, or African art history, everything that he was intersted in and when you saw those aspects of his education, you can read more into his own work where these motifs repeated. His work may seem primitive or childish at first glance, but actually they can emulate a lot of African folk art and it gives such a deeper meaning to his own artwork. I loved that his mother, Mathilde, took him to lots of exhibitions and museums as a child, he obviously soaked a lot up as he famously said, “I never went to art school. I just looked…” and had various Old Art masters books in his own library. He had a fun artwork with a Young Picasso and old Picasso together which really tickled me, a lot of joy comes out in his artwork, especially with his vivid use of colour and textures.

One of my favourite pieces that was so striking was a very simple, stark self portrait in silhouette.  Lacking the colour of his famous pieces, I found it so compelling and almost emotional to look at?  Plus the imposing frame it was in, housed on a black wall really drew your eye to the image.

Photo credited to Camille Watercolours at her own blog here

What I love about art is that it is literally so visual and accessible as a deaf viewer, there was a lot to take in. There were a few videos in various rooms, there was one I really wanted to watch that had interviews with Andy and Jean-Michel together and it was lovely seeing them talking together. I wish I’d known what they said but there were only two headphone sets and the exhibition guide in the room said there were transcripts available downstairs but as I went around the rest of the exhibition, I’d forgotten about them. I wish the Barbican had thought to subtitle those videos, because then ten or more people standing around watching one video would gain more insight into what they were saying in a two minute video, rather than just waiting for two people to stop listening and pass the headphones over. 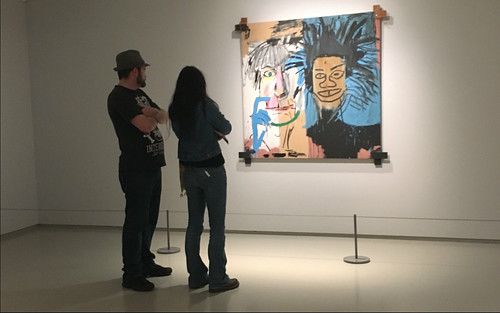 The gift shop was fantastic with a range of books and artworks replicated on postcards, tote bags, shirts, magnets and even a fancy silk scarf! I picked up an enamel pin of Basquiat’s trademark scribbled crown.  I wish I’d bought the exhibition catalogue but I couldn’t justify it at the time and feel like the exhibition was a full on immersion of his artwork, enough to tide me over. 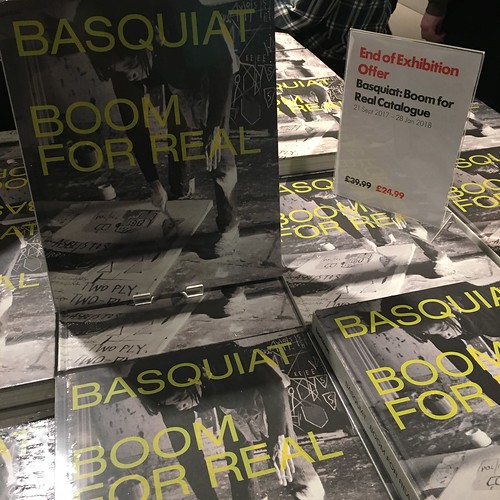 Kudos to the Barbican for putting together such a comprehensive and full exhibition with so many different artworks and paraphernalia from Basquiat’s life and career, as well as his life with his friends.  I’m really glad I managed to get a ticket to go! 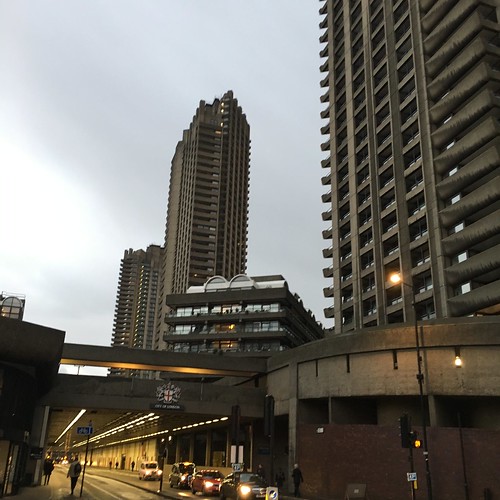 Leaving the exhibition, I found a Banksy piece that referenced both Keith Haring and Jean-Michel Basquiat. outside the Barbican’s famous tunnel walkway. So fitting for a street artist himself to make this tribute! 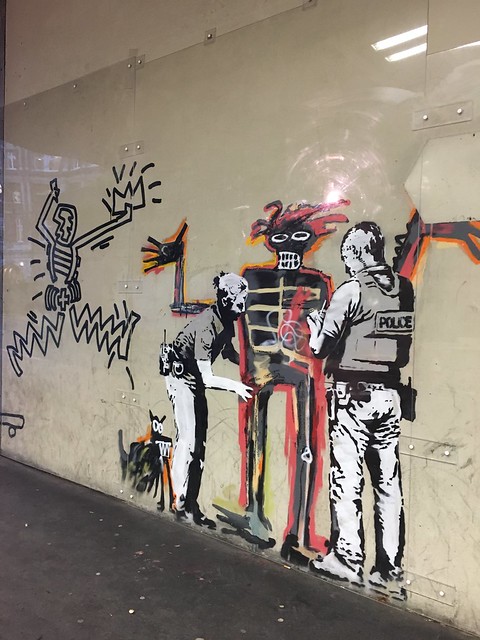 I loved that Keith Haring was a contemporary of his and a friend. I knew Keith Haring’s name and artwork growing up so I was quite surprised that I hadn’t learnt more about Basquiat in the past, but it seemed he shone brightly but for a limited time due to his drug addiction that sadly claimed his life in 1988.

A few days after the exhibition, I stumbled across a new series on Sky, called AUCTION, showcasing modern and contemporary art auctions at Sothebys and Christies. In the very first episode, Sotheby’s auction off an Untitled 1982 piece from Basqiaut, a lovely large colourful piece, an art consultant says how he looked at it in person for so long, he felt like he left with “his eyes bleeding”. Gasps of disbelief rippled through the auction room as bidding opens at 57 million dollars. These auction audiences are not newbies, many of them would be seasoned veterans of the auction world as collectors, buyers and sellers alike.  The audience’s phones were out to capture the last bid as the Basquiat Untitled 1982 went to a Japanese bidder, for 98 million. Ooof, imagine the commision fees on top!   ….. I checked….. $110.5 million all in total. Wow.

It had originally been bought by a collector in 1984 for $19,000. No wonder people go into art for investment purposes!

It was quite emotional after having seen the depth and range of his artwork on exhibition, to see a piece be sold off and for so high. I hope the buyer displays it proudly somewhere for people to see and I wonder how Basqiuat  himself would have reacted? 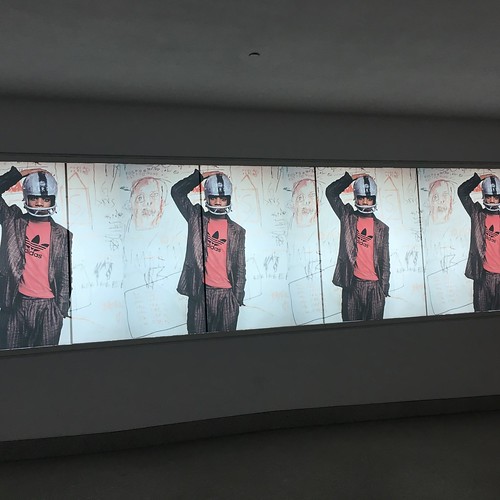