Oh, I love the Internet, just the fact that you can find, follow, support and interact with talented, creative people who do something you like!

My last Twin Peaks entry left me wondering what Scott Campbell was doing now and was ecstatic to find out he was doing a signing of Great Showdowns at Forbidden Planet the next week!
He wouldn’t be alone either as Olly Moss would be signing his new book too, Silhouettes of Popular Culture. 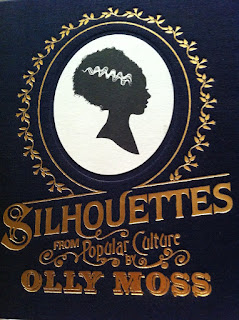 Just look at that amazing cover on Olly’s book 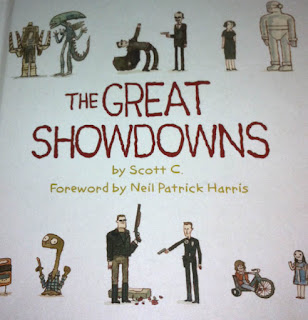 and can you name all the movies on Scott’s?

I followed Olly Moss’s work ever since he did that amazing minimalist black and red movie graphic set on Flickr (how much do you love the Indiana Jones one, sigh), that infamous Spoilt shirt and he started doing posters in Empire magazine too.

I couldn’t turn that opportunity down to see the two of them in one place and especially when Scott C emailed to say he was bringing Twin Peaks prints to sell alongside signing his books, I just had to go!
The signing was only for an hour from 6-7pm so I was anxious that I may not get there in time as I finish work at 6.

Luckily Forbidden Planet is just down the road from the office and the queue was starting to wrap around the horror and supernatural romance shelves by the time I stepped down into the basement. So many lurid covers to giggle at.
As I peered around the people nearing the front, I could see the artists themselves taking their time to talk to people, drawing portraits in books, doodling and signing away and how did I never know that Scott C looked like Jason Sudeikis?! Um, helloooo.

I saw a girl in a West Ham scarf manning Scott’s portfolio as people flipped through. Alas I had no cash on me(self, stop doing that) but I was able to reserve the last print of Concentrating on the Js that Scott had in his portfolio, hooray! She kindly took it out and put it in an envelope for me to pick up after the book signing then I carried on waiting in the queue and flicking through the books.

As an 80s pop culture fan, these two books are a total delight, both very striking in their artwork and a real joy for anyone who is a fan of films and artwork. Olly’s book of silhouettes riffs on the art of profile silhouettes by showing the profiles of famous characters from films, television and video games. They are strikingly beautiful and it’s amazing how well Olly is able to get characters down to the bare details. 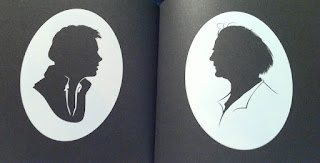 Scott’s Great Showdowns has a more whimsical watercolour take on the showdowns that happen in our favourite films, all with smiley faces painted on. 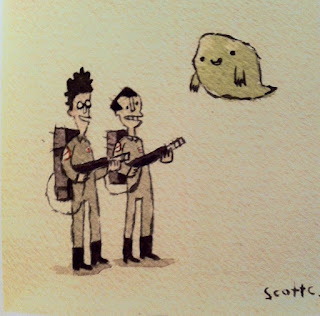 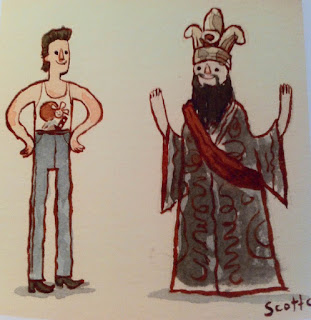 The cheque’s in the mail!

Lots of people were there for Scott and Olly, I was also hoping that Kate Beaton may make an appearance and had brought her brilliant books, Hark! A Vagrant and Never Learn Anything From History.

I later stood off to the side to purchase my Twin Peaks piece  and saw Kate Beaton talking to Olly!
I waited to be sure it was her, she introduced herself to someone as Kate and then I managed to catch her eye and ask if she would sign my books? She walked over and said hi as I took my books out, I had one of the original books of History and she was excited to see it, noting that it was one of the original runs and thanking me for taking care of it. We talked a little about history, comics and being in London and she drew a pair of my favourite characters of hers, The Mystery Solvin’ Teens! 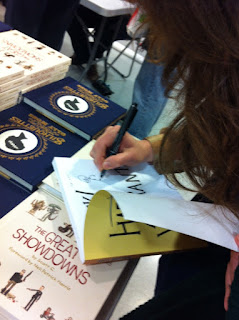 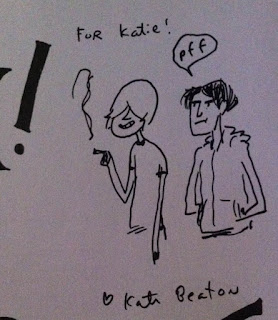 Needless to say the signing completely overran and there were lots of happy people clutching their signed books. Thanks to Forbidden Planet for running it all smoothly and to Olly, Scott and Kate for their time and signing so many books and prints! I cannot wait to frame my Twin Peaks art, it is even more beautiful close up.

I popped into Forbidden Planet at lunchtime on Friday to get some more copies of the books as Christmas presents for friends, and was delighted to see a stack of signed Kate Beaton books for sale.
Here are a few of the characters she drew! I really do recommend her Hark A Vagrant book for fans of history and literature, they’re such fun to read. 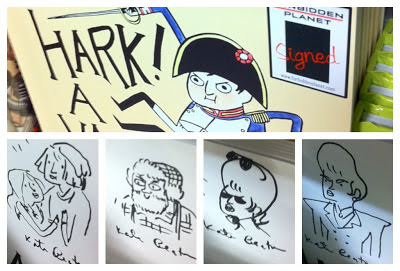 I love the 80s Power Dressing Woman!
Do you have any favourite webcomics that you recommend?