As a long time film fan, I’ve been excited to see that the BFI’s London Film Festival have offered English subtitled films for a few years (I was overjoyed to see End of Watch with subtitles and once even bunked off work to see Whiplash with subtitles. Worth it!) and this year has a great line up, spanning 345 films!

The festival runs from Wednesday 2nd October to Sunday 13th October across 12 venues (7 in the West End and 5 outside of the West End, including the BFI’s Waterloo venue.)

The 10 English language subtitled films at the BFI London Film Festival 2019 consist of the following in chronological order and there are always more screenings to be added, hopefully!

We stan an accessible film, as The Peanut Butter Falcon stands out from the rest of the London Film Fest pack, by subtitling all their showings of their film as well as BSL interpretation for their opening night intro and Q&A!

The film premieres on Thursday 03 October 2019 17:15 at Embankment Garden Cinema

Followed by Friday 04 October at 14:45, also at the Embankment Garden Cinema

Showing at the Embankment Garden Cinema, Sunday 6th October at 11:10am.

Showing at the Odeon Luxe Leicester Square on Sunday 6th October at 14:30

Showing at the Embankment Garden Cinema on Tuesday 8th October at 11:15

Showing at the Embankment Garden Cinema on Wednesday 9th October at 11.30

Showing at the Embankment Garden Cinema on Friday 11th October at 15:00

If we are unfortunate enough to miss out on tickets due to the popularity of the festival, at least it is a heads up that English subtitles will be available when the film comes out in general release, so be sure to ask your local or favourite cinema to screen them with subtitles when they come out on general release. I know I will definitely be checking out Knives Out and Jo Jo Rabbit if I am unlucky in my quest for tickets for the subtitled showings at the festival!

Ordinary Love and Luce are distributed by Universal so they should be getting a cinematic release. The Peanut Butter Falcon will be out in UK cinemas later in October as well as Knives Out which is out in November and JoJo Rabbit which is out in January.

Althought I was disappointed not to see two films that I had been waiting for, Proxima and Fonzo as they both star Matt Dillon, I am excited for this year’s line up and will be checking out some other films at the festival including Honeyboy and The Peanut Butter Falcon as I have a sweet spot for Shia LaBeouf. Noah Segan is still my movie boyfriend, so Knives Out is a huge deal for me, having seen all of Rian Johnson’s previous films at the cinema, I don’t want to miss this one!

I tend to use the English subtitled films as my shortlist for the festival so my own Must See list consists of Knives Out, JoJoRabbit, The Lighthouse, A Hidden Life and I am intrigued by A Portrait Of A Lady On Fire (which is French with English subtitles!)

What do you think you would be interested in seeing? Have you been to the London Film Festival before or seen a subtitled screening at the BFI?

8 other screenings will have BSL interpreted introductions and short q&as, you can find these and the above information at the Festival Access page as well as tips on booking access tickets. As tickets booking always opens with such a rush from BFI members and then the general public, there is often a second wave of ticket booking available and there may always be a few tickets available on standby at the ticket booth in Leicester Square or the venue box offices themselves.

Before closing this blog post, I must say that I now work for the BFI but I have been a member for many years and am glad they are making the festival more accessible to a disabled audience.

As Drew Barrymore covers the new Instyle with the ultimate throwback, reinacting some of her ’80s looks, I wanted to highlight her first book, Little Girl Lost, co-written with the king of Hollywood celeb tell alls, Todd Gold.

It’s a moving book, as other than fun accounts of working on set of various films, Drew recounts her difficult relationship with her mother and their struggles with each other during her turbulent childhood and teens. During her well publicised battles with drink and drugs, Drew entered rehab twice before the age of 14.  It is worth a read if you can find it!

I got my copies from Drew Barrymore fans, thank you Ashley and Misti!

*Drew recounted how her friends lured her to a surprise 10th birthday party at Limelight, by saying Matt Dillon would be there.  “When I learnt Matt Dillon was just the bait, and not actually there. I got angry… for like half a second.  Maybe I was spoiled but I had such a crush on him.”

*She went to Rob Lowe’s 20th birthday party, heavily made out with his little brother, Micah and had her first slow dance with Emilio Estevez.    Hashtag goals! Mmm, Emilio.

*Her first romantic kiss was with none other than the yummy Breckin Meyer.    Get it, Young Drew!  Breckin has a pseudonym in the book as…. Brackin… Good work, Mr Gold.

*Before the premiere of  Firestarter, Drew spent two weeks at Stephen King’s house in Maine, where he made “the best french toast!” He also told Drew and his kids made up ghost stories each night in his attic office. You know they would have been creepy!

In the early ’90s, Drew also worked at Mickey Rourke’s kiosk, Mickey and Joey’s as a side job whilst she auditioned.

I really enjoy Santa Clarita Diet and look forward to a second series in 2018! Plus, wouldn’t Drew be a great cameo in series 3 of Stranger Things?

If you want to learn more about Drew’s childhood or her life up to date, follow The Drewseum and their extensive archive of items relating to Drew. They have a fantastic and moving biography all about Drew on their site.

Drew also has another book, Wildflower but it’s more different chapters and stories from her life, rather than a chronological follow up to Little Girl Lost. I hope to add Wildflower to my bookshelves soon, especially with its lovely blue cover in paperback. It’ll look great alongside my copies of Find It In Everything and Little Girl Lost.

Got you covered here at Eighties Teen Dreams, albeit a bit late, but better late than never!

I love wrapping, this year I’ve slacked a bit but there’s nothing more fun than personalising a present with someone’s favourite fandom as an extra personal touch! I wanted to show some fun examples that you can use!

I couldn’t find any Star Wars themed paper in time to go with this cute gift bag, so the closest I got was a lovely holographic constellations paper… ehh, close enough! 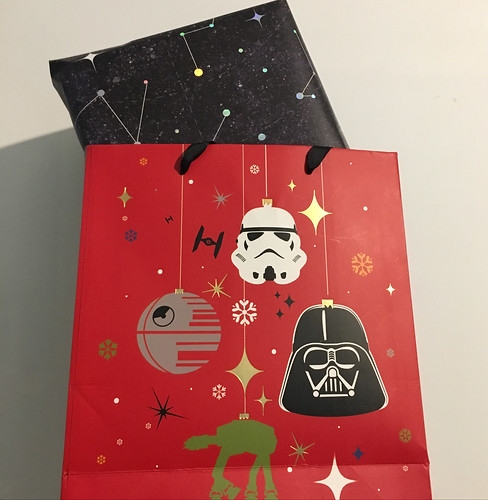 I put together this Scream themed package for a friend of mine. I used the backside of some fancy wrapping paper, (as I couldn’t find any pure white) used  left over from Halloween fake blood spray and a Billy Loomis badge from HorrorscopeOfficial, pinning together some festive ribbon and I was really pleased with how it came out. 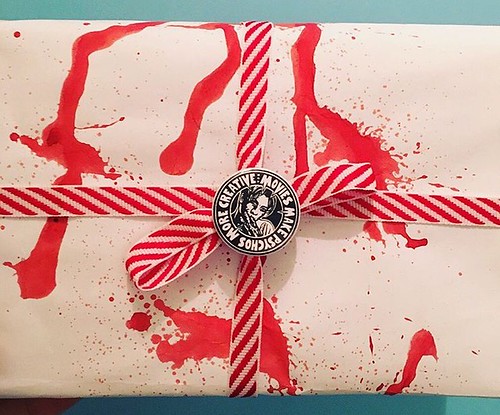 You can personalise the wrapping paper itself, a few companies let you print custom designs which I was looking into as the delightful Missy Boop did the most amazing Outsiders themed wrapping paper (and matching gift tags to boot!) for me, that I just had to have to wrap books last year!  Unfortunately I couldn’t find any companies to print it in time for me, so I just ran it off on the home printer but I was so pleased with how it came out. Again, with the themed pin holding together ribbon. 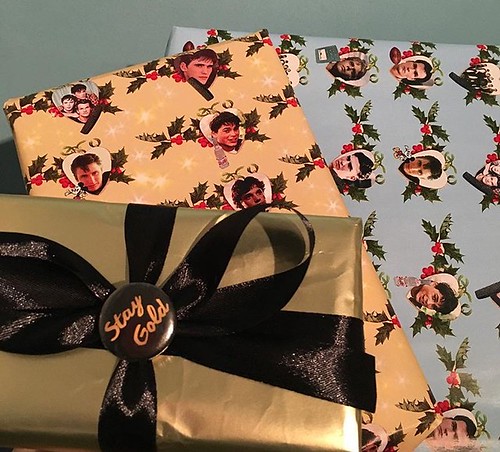 People underestimate how much a plain colour really pops in wrapping paper, if there are several small items grouped grouped and tied together, especially it’s a lovely golden sheen. 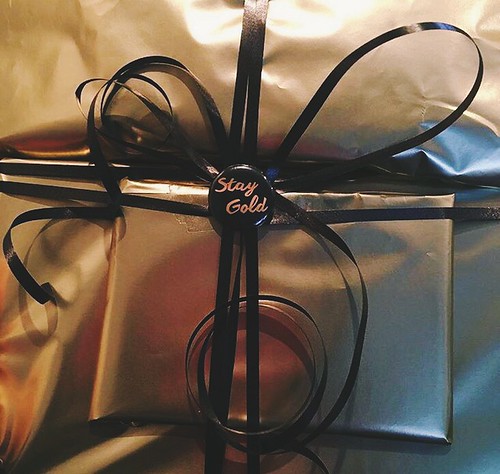 I like using different textures and materials, having a variety on one gift can help it look special as long as it’s themed in colour, overwise it could be overdone, but heck, it’s Christmas, put EVERYTHING ON.  Matte star on glitter tag on holographic foil? Yes please! 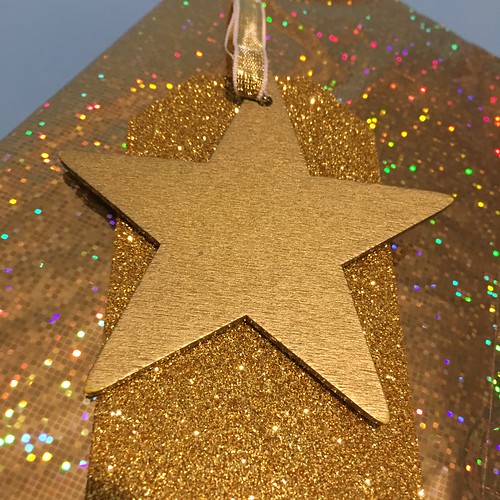 Talking of everything, don’t sleep on those massive Pat Butcher earrings that you see in the shops that you’d never wear, but they’d be the perfect touch for a ribbon or keeping a gift tag on a giftbag! 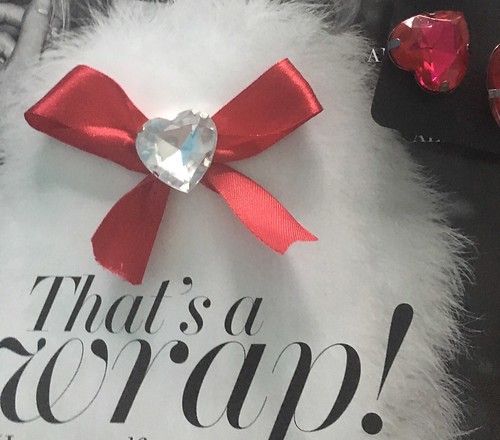 I’m obsessed with movie enamel pins and can’t stress how much these really elevate a present even if you use cheap ones as an extra touch on a gift tag. (Thanks Primark!) 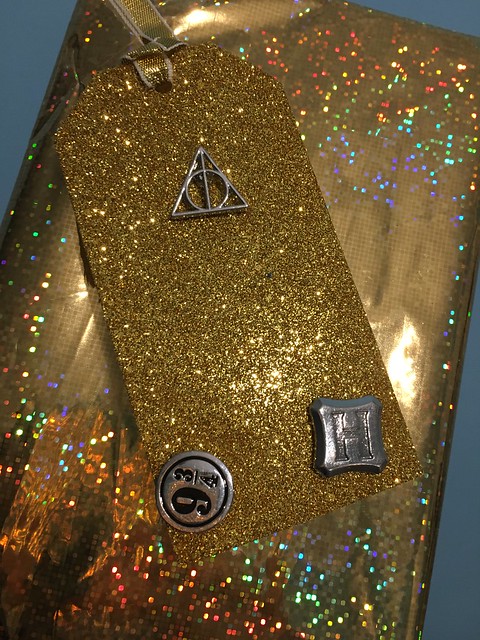 I especially loved the way these small Karate Kid pins add some much needed flair to plain ribbons on a gift box! Who else is excited for the new Cobra Kai series next year?! 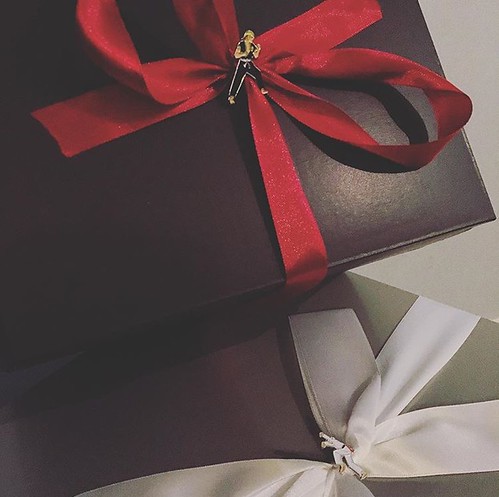 If you don’t have any themed pins, you can always use coloured washi tape to envoke a theme or colour scheme associated with a fandom. Here, I used some Twin Peaks colours, obviously the wrapping paper does most of the work here but thought the taped gift tag just added an extra touch. 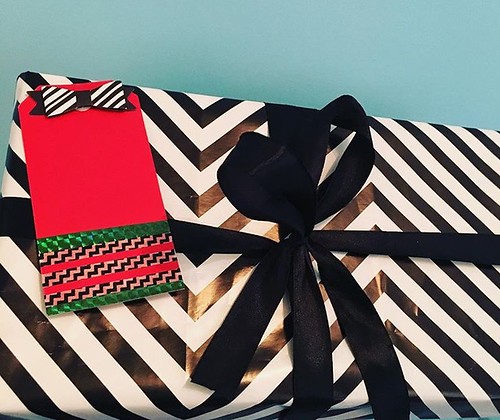 You can also use stickers, cut out pictures taped onto the wrapping paper, stamping using a cut out shape from potato, foam or pieces of rubber lino for homemade stamps! Have fun and your gift recipient will be excited before they even open the gift!

Merry Christmas, Teen Dreamers!
Hope you’ve enjoyed the festive season so far!
I made the above bunting to hang on my shelves when I’d done all my wrapping.
Am rather tempted to leave it up all year.
As the nights draw in and it’s cold, I always find seem to find myself outside a second hand bookshop.

Today I ventured into Any Amount Of Books, which is always fun to visit.
I’m trying to be better with book buying/spending so I reluctantly put down three Enid Blyton Circus books that would have been just perfect for a friend and started to rifle through their film shelves.
The fun about these places is that you never know what will be on the shelves.

Oooh, let’s have a look inside!

That’s….not what I was expecting.

In the back is a portfolio of the artworks with titles, dates and an essay from the artist, Dawn Mellor on Michael Jackson’s appeal to her as a black teen. She stopped when his songs were turning too ‘seductive’ and ‘predatory’.
I thought this was such an unusual book, I bet some Michael Jackson fan/collector would like to have it.
The rest of Any Amount has lots to discover in piled high shelves, boxes, tables and corners. I was tempted by this New Women In Rock book in the half price basement. You can’t go wrong with Grace Jones, Heart, Siouxsie and others!

I ended up with this amazing new book on Bowie, published this year, Any Amount had it for half the retail price and it’s a gorgeous little book. Can’t wait to read more of it this weekend…

and I shall be bringing you new magazine treats in the new year!

Ohhhh… Yesss indeed.
Oh, I noticed a few people have been leaving comments with requests, I shall have a few posts up soon!

I love reading the magazines where the writers come up with the wildest straplines ever.

Special is definitely the word I would use!
Happy Valentine’s Day, there will be more posted tomorrow if I can get my scanner to behave!